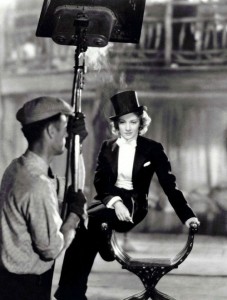 I was an actress. I made films. Period.

Marlene Dietrich (1901 – 1992) probably thought no one would be interested in a documentary about her life and art. Her entertainment career spanned 55 years — beginning with her German film roles in 1923 and ending in 1978 as she crooned the title song in the movie Just a Gigolo.

Perhaps she had no desire to reminisce about her work as an enigmatic actress and cabaret singer. In fact, she referred to most of her oeuvre as “kitsch.”  However, Dietrich doesn’t seem as derogatory as she made herself out to be in the late Maximilian Schell’s 1984 film Marlene (available on DVD from Kino Video). Then again, she did go out of her way to be difficult.

Schell recorded Dietrich’s conversations on audio tape in her Paris apartment during 1982. A year later, he reconstructed the apartment interior along with an adjoining editing room — an innovative and clever device, though a bit pretentious at times.  In some ways, Marlene is a documentary about the making of a documentary. 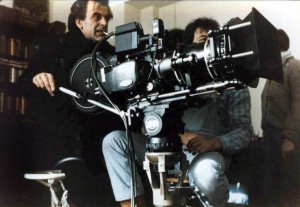 By not seeing Dietrich as she looked in 1982, Schell draws the viewer into the legend displayed in memorable film clips, newsreel footage and television excerpts. Furthermore, the multilingual interviews between Dietrich and Schell emerge as a verbal duel. Schell’s questions are as combative as Dietrich’s responses. “I’m not contracted to be exciting,” she states at one point.

While Dietrich insults Schell throughout most of the interviews, we are treated to a generous coverage of her cinematic highlights: the star-making role of sexy showgirl Lola in director Josef von Sternberg’s The Blue Angel (1930); the “Hot Voodoo” number from Blonde Venus (1932); her visually stunning performance as Catherine the Great in The Scarlet Empress (1934); and her box-office comeback as Frenchy, the tough-talking saloon girl who throws everything but the bar at James Stewart in the classic western-comedy Destry Rides Again (1939).

Unfortunately, Schell hits a brick wall in his attempt to discuss the Dietrich-von Sternberg partnership, which ended in 1935 with The Devil Is a Woman (Marlene’s personal favorite).  “He was always deliberately making life difficult for me [in order] to make me learn something,” Dietrich said of the influential filmmaker. Otherwise, she cuts off Schell by telling him to read her 1979 memoir My Life.  The result is a missed opportunity.

What’s particularly fascinating about the Hollywood years is Dietrich’s growth as an actress.  In retrospect, she delivered some of her best performances toward the end of her movie career — notably the “dual” role in director Billy Wilder’s Witness for the Prosecution (1957), the extended cameo as a bordello gypsy in Orson Welles’ Touch of Evil (1958), and her last major portrayal as the widow of a German general in Judgment at Nuremberg.

Dietrich’s beauty and eroticism also fill up the screen in her later television appearances, as she sings favorites such as “Falling in Love Again” and “Boys in the Backroom” in her inimitable, throaty style.  She can be mesmerizing and provocative when standing on a bare stage — entertaining American troops during World War II or performing in concerts across the globe.  The magnetism never dissipates. 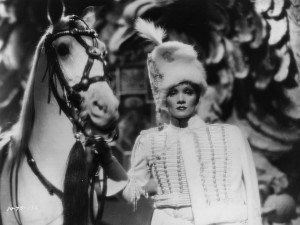 Schell enhances the mystery of Marlene Dietrich by letting her work and personality speak for itself. Though hard-edged and contradictory, she reveals a sentimentality that is quite moving, as when talking about her hometown of Berlin.  The memories catch up with her and she begins to cry, admitting “I am a romantic, a dreamer.”

Nevertheless, Dietrich remains dismissive toward Schell’s work: “It will never sell in America.” Little did she expect that Marlene would receive a 1985 Oscar nomination for Best Documentary Feature, along with awards from the New York Film Critics Circle and the National Society of Film Critics.

In a February 1987 Los Angeles Times interview, Schell said that Dietrich (whose contract included a share of profits) was keenly aware of the film’s international success and left the following message on his answering machine:  “Isn’t it wonderful that we had that fight?” Later that year, Dietrich published her final volume of memoirs, also titled Marlene — an ideal companion piece to the 96-minute documentary.