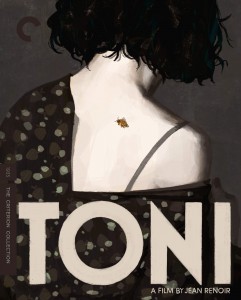 Toni (1935) represents a departure for Jean Renoir on multiple fronts. Shot largely on location in the south of France, the film looks unlike the filmmaker’s previous studio-bound work. There’s a whisper of similarity to his father’s en plein air method and the idyllic pastoral settings that result. Like A Day in the Country (1936) Renoir’s subsequent unfinished masterpiece, Toni quietly exults in its outdoor locales — a hedge-lined path or a shaded hillside — though the emotional lows in Toni hit an extreme that the melancholy-tinged A Day in the Country doesn’t approach.

Toni is also an outlier among Renoir’s work for its focus on the working class, as it’s based on a true story about migrant workers in Martigues. Renoir mentions in the introduction included on Criterion’s disc that he realized that class was a more prominent line of demarcation than nationality. Of course, it’s not such a neat delineation, as a wry early scene shows two men complaining about a fresh influx of immigrants to the town — before revealing they themselves are recent immigrants.

These frequent asides, mostly featuring nonprofessional actors, and the film’s documentary-like style — longer takes, few close-ups — place the film as a clear precursor to Neorealism, though the film’s social and political impulses are much less of a force than its commitment to melodrama.

The film’s narrative of a love triangle between Italian worker Toni (Charles Blavette) and Marie (Jenny Hélla) and Josefa (Celia Montalván) runs hot, but Renoir’s approach plays it down. Until the final act, the film’s shockwaves are more of a function of its elisions than anything. Toni’s faintly flirtatious meeting of Marie, owner of a boarding house, cuts almost immediately to him wearily waking up in her bed, the doldrums already set in on their relationship. And just as Toni is coming to terms with the fact that he can’t have Josefa, the film cuts like a gut punch to a wedding banquet after she’s married Albert (Max Dalban), the casually cruel boss at Toni’s quarry job.

The film’s textures of realism — a funeral procession, a quarry worker’s labor, a train coming into town, a band’s folk song — ground what eventually becomes a heightened tale of violence, where Renoir appropriately shifts to incongruous close-ups. But this verité-style background also sets off moments of poetic sublimity, both tender, like Josefa’s seduction of Toni via wasp sting (envisioned on Katherine Lam’s beautiful painted cover for Criterion’s edition), and mournful, like a character’s attempt at suicide, captured in a breathtaking long shot across a vast expanse of sea. In all of its modes, Toni is an ecstatically gorgeous film, and it comes to Blu-ray in a presentation that matches.

Criterion’s 1080p, 1.37:1 transfer is sourced from a new 4K digital restoration, and the results are extremely pleasing. Images have beautiful depth to the grain texture, fine detail is strong and black and white levels are impressive. There are few dropped frames throughout the film, but damage is basically nonvisible elsewhere. The uncompressed mono soundtrack is also quite clean, with no major issues.

On the supplements front, Criterion ports over the Kent Jones and Phillip Lopate commentary track from the long out-of-print Masters of Cinema DVD release. Conversational, but dense with information, it’s a strong track from two heavy hitters.

A new video essay by Christopher Faulkner examines the film’s production history, including its now-lost longer original cut and Renoir’s association with Marcel Pagnol, who had a studio in the region. And the aforementioned Renoir introduction from 1961 rounds out the disc. The package includes an insert with an essay by scholar Ginette Vincendau.