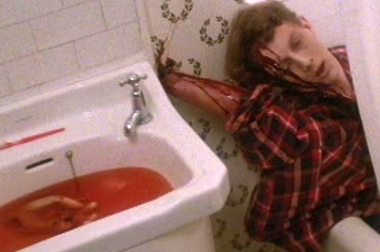 Dead Kids is a one-of–a-kind horror treat, a teen mayhem tale in which the small town ambience ambiance brings s fresh sense of innocence to what had for several years become an exceedingly ugly genre. A string of knife killings in tiny Galesburg, Illinois baffles both the coroner and Police Chief John Brady (frequent Woody Allen star Michael Murphy), as no two murders are alike. Encouraged by his friend Oliver Myerhoff (Marc McClure of the Reeve Superman movies), John’s teenage son Pete Brady (Dan Shor) volunteers for some paid psych experiments at Galeburg College, in the lab of the beautiful Gwen Parkinson (Fiona Lewis of The Fearless Vampire Killers), helped by her odd assistant Nagel (Arthur Dignam). Gwen offers little or no explanation of what she’s up to, but all Pete must do to earn his first $100 is take a pill. His spirits are so high that he invites the lab receptionist Caroline (Dey Young of Rock ‘n’ Roll High School) out for dinner. Bucking other locals convinced that he’s harboring a personal grudge, Chief Brady is convinced that the killings have something to do with secret experiments in the college lab. Sixteen years ago his wife worked there, and died under mysterious circumstances related to bizarre experiments being conducted by the notorious Dr. Le Sange (Arthur Dignam), who died himself not soon after. Or did he?

Believe it or not, Auckland New Zealand of 1980 comes across as a perfect idealized U.S. Midwest, with tidy frame houses, pristine green grass and streets teeming with vintage American cars. Pete Brady drives a beat-up Ford Thunderbird. The American actors seem right at home and the Kiwi talent fits in beautifully. We have to assume that the producers purposely made Dead Kids look as if it were an American product. They certainly score better than the Italians did twenty years before, when they Anglicized all the names on their horror film credits to make them look like English productions. 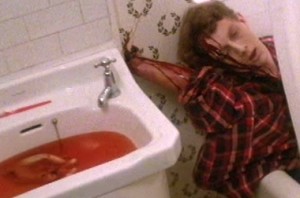 Dead Kids works because between its horror material, it delivers a compelling, sympathetic image of family life. We see no rotten parents driving their children into trouble. A prospective teen girl victim sneaks out of her window to attend a forbidden party, but she’s very much concerned with returning before dawn, so as to not upset her folks. Pete Brady is very close to his father, and understands his continuing suspicions and ill temper. John Brady has a steady love interest in Barbara Moorehead (Louise Fletcher), an understanding woman who wishes John could let go of the unpleasant past. John’s suspicions are heightened when he realizes that all the victims so far are related to the four or five men who opposed La Sange so many years ago. But nobody will listen to him. There are also no pig-headed cops. Brady doesn’t even wear a uniform. His office clerk is played by the highly familiar American Charles Lane. Normally one would think a local actor would be given such a role, and Lane seemed to exclusively play obnoxious clerks and unfriendly bureaucrats. Here he’s good pal, competent worker and a thoughtful helper. The production also flew in character actor Scott Brady, of Johnny Guitar, among dozens of memorable films. Scott Brady’s Chicago detective isn’t much use in a case that makes no criminal sense. He tells some dirty jokes and orders in a “bunch of scientific stuff” that probably won’t help very much.

All of these characters are afforded an unusual degree of respect — none is present to be the butt of humor or a disposable victim. Typical of this concern in Dead Kids is a housekeeper played by Beryl Te Wiata. It’s a throwaway role until she witness a grisly killing in progress. Even after being stabbed herself, she manages to describe her attacker over the phone. The movie treats her as an unfortunate heroine, not killer bait.

In a lesson horror movies often forget, our concern for the characters makes the scary content all the scarier. At the core of the picture is a time-warp concept from a ’50s mad-doctor picture like The Unearthly or I Was a Teenage Werewolf, the kind of medico-fantasy that David Cronenberg was already exploiting. The alluring Gwen Parkinson is using drugs and who-knows-what to effect a remote control of her teenaged subjects, who are apparently programmed to do appalling crimes, and then experience complete memory loss.

Laughlin and Condon stage their killings with more finesse than is usual for slashers made in the wake of dreck like Friday the 13th. Some of the stabbings are explicit and others less so, but each is shocking. One dismemberment in a bathtub makes us fear for more atrocities, and a close-up sight of a boy trussed up as a scarecrow, with his eyes carved out, is strong stuff. But the film doesn’t revel in the individual killings and they don’t become exercises in one-up-manship: it’s not like lovers are skewered or eyes are pierced because the production feels the need to top the latest Argento or Fulci gorefest.

The most disturbing scene plays off our most simple medical nightmares. Pete Brady is strapped into a chair by the attractive but utterly un-reassuring Gwen, who reaches across for the largest, most wicked-looking syringe seen this side of The Amazing Colossal Man. Without so much as a “hold still’, She then plunges the needle into the corner of Pete’s eye socket and pumps in several ounces of green fluid. If this isn’t performed in one shot, it feels like it — and is effective enough to make an entire audience yelp and squirm.

Elsewhere Laughlin and Condon indulge what must have been some personal desires. One of the killers wears a rubber Tor Johnson mask, reminding us of the Captain Kirk mask worn by the mad killer in Halloween. Even better is an in-from-left-field musical number during a rather kitschy costume party. Pete shows up and meets a desirable girl just as Lou Christie’s Lightning Strikes causes all the kids to hop-dance in unison, with a handsome camera pullback making it all look like completely self-conscious, high spirited choreography. Some viewers think the stylized scene is just plain dumb, as what are kids from 1981 doing rocking out to a 1966 oldie? Actually, the song’s lyrics about an unstoppable compulsion seem fully appropriate.

Perhaps Dead Kids’ final scenes were meant to show Michael Laughlin’s higher ambitions. With the threat vanquished we’re treated to several images of happiness unexpected in a horror film by anybody, from anywhere. After all, these were the years where horror films were outdoing each other to generate nihilistic conclusions. The peace won by Michael Murphy’s character is hard-earned and much deserved. The movie in particular is very kind to the great (and sexy!) actress Louise Fletcher, who since her oppressive nurse in One Flew Over the Cuckoo’s Nest had difficulty obtaining sympathetic parts.

Severin Films’ Blu-ray + DVD of Dead Kids is a great improvement over two earlier DVD releases, Elite’s from 2003 and Synapse’s better disc from 2008. The very widescreen image (Laughlin and cameraman Louis Horvath use every inch of the wide screen) seems enlarged in all four directions. The first scene looks terrible — out of focus, drab — but from then on the film’s images are sharper and more colorful than any copy we’ve seen before. The sight of Fiona Lewis stalking around the lab complex in her white smock, high heels and just-so hairstyle is quite arresting. It’s actually too bad that we don’t learn more about what makes the evil Gwen Parkinson tick — she’s worthy of a sequel all her own.

As reported at the very discerning Mondo Digital website, the movie here encoded is actually two minutes longer than its reported running time and has two brief scenes not seen before. As the sharp-eyed Nathaniel Thompson says, Severin’s disc contains an unheralded expanded cut!

The film contains some local New Zealand rock of the period, but soundtrack duties are handled by the estimable Tangerine Dream. The tracks are effective, if not nearly as expressive as those on Michael Mann’s Thief (which just came out from Criterion). Tangerine Dream’s eerie music is auditable on an Isolated Score track.

One commentary with writer Condon and actors Dey Young and Dan Shor hails from the earlier DVD and is still entertaining — all three talents have gone on to busy and rewarding careers. Severin adds a new commentary with Michael Laughlin, unfortunately not the best of recordings. We get some insights but not a full picture on this interesting filmmaker.

A special treat is a nicely-paced interview with special makeup effects artist Craig Reardon, the hand-picked protégé of Dick Smith. With candor and honesty, Reardon goes over the ups and downs of what was one of his first solo makeup jobs. Plunked onto an airplane with a few prepared latex appliances and a fake gelatin arm provided by Tom Burman, Craig had to come up with a difficult effects gag straight off a twenty-hour plane ride, and pulled it off with pure ingenuity. Craig’s ‘disguise’ makeup for Arthur Dignam, using techniques learned from Dick Smith, is a whopping success in the completed picture. We also see some rare photos of Reardon’s later, more universally celebrated work. And he’s still active, capable of terrific, cutting edge makeup concepts.

Severin’s package concludes with trailers for both International (“Dead Kids”) and U.S. (“Strange Behavior”) markets. Dead Kids is one of the few modern horror films that appeals to this reviewer. i respect quite a few, but this one I actually warm up to.